You Are Not a Crow: “Shiny Object Syndrome” and 3 Tips for Fighting It 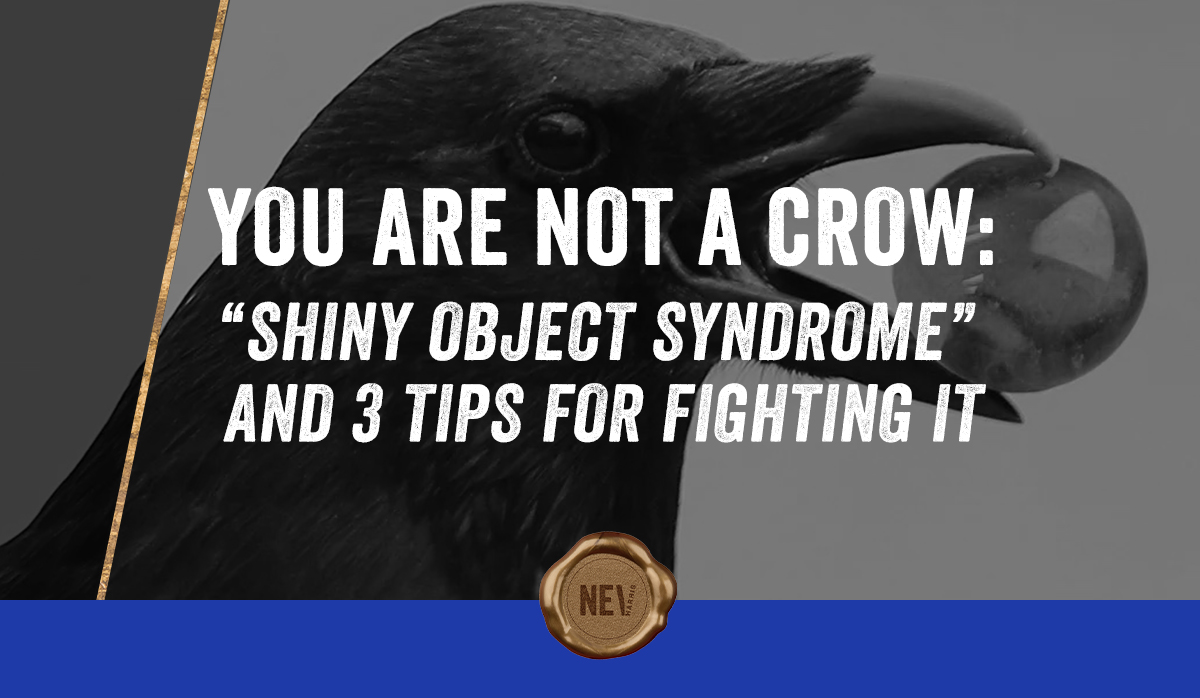 Unless you stay up for hours on end watching YouTube videos (guilty) or perhaps have a very random fascination with birdwatching, you might not really know a lot about crows. Don’t worry about it—I’ve got you covered.

They’re much more intelligent than most people give them credit for. They can mimic sounds like a parrot to manipulate other creatures (including people) and get what they want. They’ve been known to establish symbiotic relationships, as well as bartering systems, with humans and other animals. Crows have even been studied using tools and solving logic problems.

Even more interesting are the endless reports from their human friends that crows are fascinated with objects that seem to have inherent value to people. They have been known to pick up, play with, and offer small tokens and trinkets that are shiny and bright.

It’s from the crows and their cousins, the magpies, that we get the term “shiny object syndrome”.

So, what is “Shiny Object Syndrome”?

“Shiny Object Syndrome” has its grips on every part of society. It’s rooted in the biological certainty that more stuff = temporary dopamine surge. We see something new, we pick it up, and we get it.

While there are other related factors to consider, such as societal pressure, feelings of insecurity, or a genuine grasping at straws, our draw to the “latest and greatest” always has a reason that makes sense to us in the moment. We often justify these acquisitions with the idea that they will make us better as individuals, or that they’ll make our businesses easier or better.

Agency owners are victims of “shiny object syndrome” as well—in fact, they could be some of the biggest victims, based on the nature of our industry in itself. Tech and the digital industry is constantly coming in with new products and services to offer—bigger, better, newer, faster, shinier. Your inbox is no doubt proof of this.

If there were any hopes of getting past the constant onslaught of “software to optimize your x and y” and “products to increase your profit margins by 8 million percent”, it might be by saying to yourself that those products are too expensive.

But don’t worry, the digital industry has thought of a solution for that too.

I’m a huge antagonist of programs like AppSumo that allow you to buy featured products in increments of 50 dollars, unlocking features as you continue to spend. It breaks down common-sense inhibitors in your brain that tell you, “Wait, what the—how much am I actually spending?!”

But AppSumo is far from the only culprit, and at the end of the day, you do have free will and discernment that you have to exercise.

Why? Because, my friend, you are not a crow.

Now, I realize that I could very probably ruffle some feathers with those last statements. I’m sure that some of you are accusing me of negating the accessibility that programs like AppSumo provide for lower-budget agencies and freelancers.

And it’s true—in a certain percentage of cases, these apps and sites do provide an advantage to underdog agencies. There’s no doubt about that.

But one thing that I’d like to see is a breakdown of profitability vs. money spent on these kinds of incremental-app programs, and I’d also like to see the number of uses per purchase extending out from the starting date. Because the majority of the people that are putting big bucks into these sites aren’t bootstrap agencies—hell, those guys don’t have a penny to waste. They’re people like you and me, caught up in the excitement of the “shiny and new”.

If you’re like me, you have difficulty “breaking up” with subscriptions. It’s not that I don’t want to—it’s just that I’m easily distracted, I don’t feel like doing it when I sit down at my desk, or I’m worried about regretting my decision. (I promise we’ll get to all of that on another day.)

So what does that mean? I sign up for something and pay the initial acquisition fee, which is probably pretty minor. But before I know it, I’m paying for twelve subscriptions every month, most of which are for plugins that I’ve either forgotten about or have used only a fraction of the amount I anticipated.

When it comes to your agency’s finances, shiny object syndrome can be absolutely detrimental. If you listen to my weekly mini-podcast “90 Seconds with Nev” (and I hope you do!), you might have heard me drop the “27.40/10K” truth bomb. Basically, $27.40 in neglectful, useless spending per day adds up to TEN THOUSAND dollars a year in wasted profits. No matter how well your agency is doing, that amount of needless profit loss should make your stomach drop.

And all because you were duped (well, you duped yourself) into a bunch of “shiny objects”.

How do I break myself out of the cycle?

Let’s take a look at the real cost of that monthly subscription you’re “just trying out”, versus the costs that the app sales promoters want you to believe.

“Hello, Nev,” you might say, “we’ve all graduated from the first grade. “A ‘one-month subscription’ means paying for one month.”

Not so fast, my friend.

Even if your original idea was just to test the app for a month, you’re going to keep justifying it to yourself for at least a year, and almost certainly longer—more like 5 years.

So let’s first take a look at your one-month cost in terms of 12 months.

I don’t want to “throw hands” with any industry names, so let’s use an innocuous example. If you’ve ever wanted to get in shape, you might know about Zwift, the platform for virtual exercise and training.

It costs $14.99 a month, which we’ll round up to $15. You might have signed up for the 7-day free trial and gotten hooked for the first two weeks, enough to sign up for a monthly subscription. Having fun and feeling good, your motivation fluctuates, and you’ve now spent $15×12 months, or $180.

But as it turns out, you’ll probably be too lazy/distracted/forgetful to cancel your Zwift subscription as your bike grows cobwebs in the corner—for five years, in fact. So let’s multiply 180 by 5 and get 900 dollars. And that’s before the additional gear.

While those numbers are not enormous, that money could be spent more effectively than on an exercise app subscription you’re probably not using.

Another huge, emotion-based response that leads to “shiny object syndrome” is the concept of need. “I need the latest version of that software,” you moan, “it’s for the good of my agency!”

But do you really need it?

Going back to the example of Zwift, you might find yourself needing to get in shape after a long, rough two years. Even more than that, you might tell yourself that you need motivation in the form of an exciting new training method.

Tell that to your gym membership, the personal trainer that you called one time, and the outside world, which you probably haven’t seen in at least two days.

If you have been able to justify your way past the first two obstacles already, let’s make a last-ditch effort to convince you that the shiny object isn’t worth it.

You might think you need something, and you might downplay the five-year cost. But you’re not out of the self-justification woods yet, because there’s a chance that you’ve already got what you need at home.

If you’ve ever looked through your current stockpile of apps, you’ve probably noticed that several of them have features that overlap. In fact, you might have software or apps that you’ve never noticed have nearly IDENTICAL features. And, news flash—you’re paying for both of them. Minus one point for innovation, and one point for efficiency.

Before you hit the “subscribe” button on Zwift, think about what tools you already have. Does your local sports shop have a running or cycling group that you could join, providing you not only access to exercise, but also fresh air and fellowship? Does your gym membership include high-intensity spinning classes that will do more for you than passively pedaling around in front of a video game?

If you’re looking to avoid unnecessary expenditures and spending based on emotion rather than need, you’ve got to get a little bit creative. But in reality, the solution is probably already staring you in the face.

Careful planning that starts with a recognition of the problem puts us on the path to improvement. While this is true in many of life’s obstacles, it rings completely true in the case of shiny object syndrome. Your goal is, in essence, to put on blinders. You cannot absolutely avoid the shiny objects that surround you, but you can control your reaction to them.

Remember that shiny object syndrome is, above all else, a bad habit. What’s worse is that it’s a habit that’s both fueled and encouraged by outside sources whose livelihoods depend on you buying as many “shiny objects” as you can.

It might take a while to completely eliminate your irrational purchases based on impulse and “wow-factor”, and that’s okay. But also keep in mind that if you’re not adopting an active mindset of gradually reducing your shiny object program, then your only alternative is to keep compromising your agency’s profits in an unproductive way.

So keep persisting in your efforts to avoid all of those shiny objects, safeguard your agency against wasteful spending, and be a crow no more!

(Oh, and just one final thought: Keep in mind that, if you know which movie that opening line is from, it’s a really good idea to check on the status of your retirement funds. If you don’t, you should probably go, I don’t know, make a Tik Tok.)

If you’d like to make more immediate progress and have visual aids at hand, be sure to download my “Shiny Object Worksheet”. It will help you visualize what you’re spending and the impact it has on your agency! 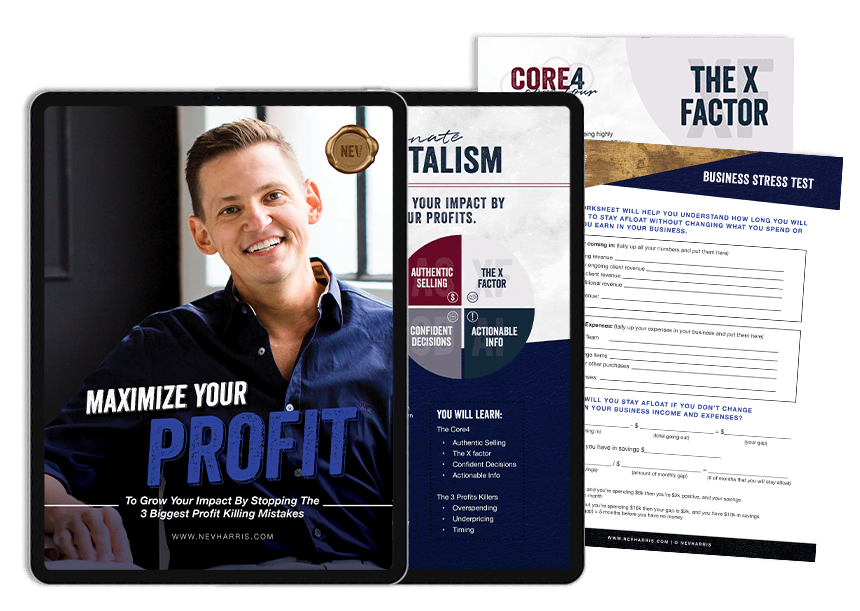